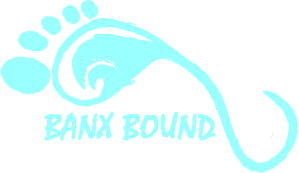 Banx Bound is a blog series about my favorite vacation spot, the Outer Banks of North Carolina, affectionately known as OBX. It’s really more like my home away from home and inspiration to many of my stories. Bodie Island Lighthouse is destination to this edition of Banx Bound.

Bodie Island Lighthouse is located on the Outer Banks of North Carolina off of Route 12, south, near Oregon Inlet. You may have visited the lighthouse and grounds during your previous trips, but this spring you will be able to climb 156 feet to the top of the black and white horizontal striped tower.

For history buffs, this is the third lighthouse named Bodie.  Two previous lighthouses were built south of Oregon Inlet. The first tower built in the mid 1800’s fell to poor design and the second was destroyed during the Civil War. The current tower was completed in 1872 and automated in 1954.  Bodie’s light can be seen for almost twenty miles.

In my lifetime of visiting the Outer Banks, Bodie Island Lighthouse was never open to climb. However in spring of 2013 after several years of interrupted restoration because of funding, it was finally open tours. You can now see an amazing view of Oregon Inlet and south Nags Head. http://www.nps.gov/caha/planyourvisit/lighthouseclimbs.htm