Since we’re one day away from Halloween, the Romance Writers Weekly crew have been asked about spooky and unexplained events. Have you ever seen a ghost or witnessed something paranormal? Received a sign from a loved one in the hereafter? If not, share the oddest thing that’s ever happened to you that you can’t explain.

Although, I love paranormal movies and books, I don’t seek out the 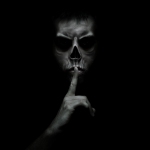 other side.  It’s the old “be careful what you seek” mentality.  I do, however, believe my late father contacted me on two occasions after his passing. I’ve also been witness to a couple of events where a friend’s daughter reached out to her.

We stay on the same street on the Outer Banks each year on vacation and have come to know and love four families. Our children have grown up together. One couple lost their daughter to cancer back in January 2011. That summer on the beach, on Heather’s birthday, she sent word while we were

all on the beach.  Doesn’t get anymore dramitic than saying, “Hi” than in the clouds.  Luckily, I had my camera in my bag.  Never have I seen clouds in letters! It was the most amazing moment. Heather’s mother told us many other signs she’d received from her daughter since her passing.

As for me, my sign came as I drove home after my father had died in 2008. Here’s an excerpt from a short I wrote to always remember the details:

In the predawn light, I left for my house to gather some things for the long day lay ahead.  As I shifted the truck into reverse, tears welled and spilled down my cheeks.  “Just let me know you are okay, Dad,” I pleaded.

About to cross the railroad tracks almost home, a large bird shot out from the brush in front of the vehicle and then back across just as quickly, disappearing into the oblivion.  I gasped, recognizing it was a dove, a symbol of peace. He was at peace. The site of the incident felt as relevant as the type of bird, but I couldn’t grasp the significance at the time.

A few weeks later, I sat under the Crepe Myrtles during lunch break attempting to read, with little success.  I gave into my rambling thoughts, allowing the nature around me to guide them.  The sights and sounds of the warm June day reminded me of summer visits to Dad’s home place in South Carolina.  It was like home to me as well, the farmhouse, pasture of horses and the long sandy driveway that I loved to run down barefooted.

And then I cam to me…Across the road from his childhood home was a railroad track! The dove had appeared before me at the instant I crossed the tracks close to my own home! It could have been any species of bird at any point on the trip home… I now understood.  He was at peace and he was home!

Lighthearted in revelation, I sat there with tears of joy in my eyes.  Suddenly, a beautiful red cardinal lighted on the limb of the tree above me, so close, I could have touched him. He cocked his head sweetly, stared down at me and serenaded me with a sweet song…Yeah, Dad’s okay!

Not having read this in years, I’d forgotten some of the details which make it even more compelling now.

I hope you’ll hop over to visit  Brenda Margriet and if you’ve haven’t visited Leslie Hachtel  please go back and check out her post for this week.