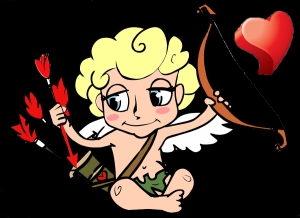 Lindy carefully maneuvered the enormous bouquet of red and silver heart-shaped balloons from her old station wagon. Wouldn’t her serious, hard-working fiancé be surprised? They’d planned to meet for dinner after he’d finished some paperwork at the office.  Six months ago she would have never imagined making floral deliveries.  Before the mortgage company where she used to crunch numbers folded.

Skipping the elevator she popped up the two flights without effort.  The firm had already ended their business day, but the suite remained unlocked.  Only a single lamp lit the reception area. She skipped down the hall giddily as the balloons bounced against the walls and her head.  Quietly, she turned the door knob to Brad’s office.  Hmm … no one there.

Occasionally, he laid out his briefs on the conference room table.  Setting her phone to record, she rounded the corner for the meeting room and burst through the door.  “Happy Valentine’s Day, baby!”  The colorful array of Mylar whirled in ahead of her dancing festively.

A feminine screech set Lindy back on her heels. As her field of vision cleared, she spied Brad’s briefs spread on the table and right next to the tighty-whities lay a pink, lacy bra…  Like a Master Card commercial, his expression was priceless.

The woman scampered behind the enormous table like a frightened deer. Brad’s expression morphed from shock to anger, but his well-trained tongue failed him. Probably in his best interest.

The odd things that flitted thought one’s mind… Like too bad helium wasn’t flammable as the flickering candles on the credenza taunted.  Roasted, unfaithful attorney sounded like an excellent Valentine’s entrée. She’d never uploaded a video to the internet, but then the naked couple in front of the lens didn’t know.

“Be sure to check your ratings.”  Lindy passed them a sharp look of disgust, and spun about dragging the balloons behind her. Anger and hurt heated her veins as she fled down the hallway. Her brother, Dan, never liked Brad.  Guess a good man could spot a lousy one easily.  She’d certainly respect his opinion of men from now on.

With tearing flowing, Lindy shot from the office building under the cover of her helium bouquet. What she’d give for her brother’s broad shoulder right now, but her aching heart was nothing compared to his daily strife of surviving in Afghanistan.

Back inside her rusted ride, she drove for home. Each mile closer, the more she detested the balloons and what they represented. A radio commercial advertising Valentine’s Day gave her an idea and she turned at the next light.

Inside the mall she found a card shop bustling with customers in search of last minute Valentine cards and gifts.  She stood near the entrance waiting for opportunity to turn her lemon of a day into lemonade.  As patrons exited she pulled lose a balloon. “For your Valentine.”

Ten minutes later and nineteen balloons lighter, her outlook had shifted. At least she hadn’t already married the cheating loser. She’d made it to her apartment door and struck the key when her cell phone buzzed. The ass hat better not be calling her. A local number displayed on the screen.  It wasn’t Dan’s. “Hello?” she answered hesitantly.

“Oh God…”  Her heart leaped to her throat.

“He’s fine. I didn’t mean to scare you. Sorry. I just arrived stateside and he asked me to get in touch with you. His unit is out of communication for the next few days.”

“I understand.” It meant they were on some mission and he couldn’t call her.  Since seventh grade when she’d been dumped by a boy the day before Valentine’s Day, Dan had always given her a silly card and some trinket or candy

“I apologize for it being so late, but my plane was delayed. How’s your Valentine’s Day?”

“Great!” She swallowed hard over the lie. “Thanks for taking the time to call for my brother. You’re on your way home?”

“To the base, but I promised Dan I would deliver his gift for you.  I can drop it by in the next few minutes, if you’re going to be home?”

“Just walking in the door.”  Lindy rattled off her address. Her brother had mentioned Conner occasionally in his e-mails, but he’d never mentioned his buddy was a local. She could believe she tasked his friend with Valentine’s duty, but Conner had impeccable timing after her shitty day.  Maybe he could redeem her current opinion of the male species.

She downed a glass of wine. Conner probably had a girl waiting for him and he had to fulfill his promise to Dan. The sound of a car engine snapped her to attention. Lindy opened the door and her heart melted.  A tall, sandy-haired soldier stepped from a taxi carrying a bouquet of heart-shaped balloons. It was all she could do not to laugh.

His broad shoulders filled out his tan military camouflage blouse nicely and his stunning blue eyes seemed happier to see her than her ex-fiancé ever had. Imagine what he’d done for his Valentine.

“From Dan,” he said handing her the curling streamers. “He asked me to give you this, also.” His warm lips branded her cheek with a heat that made her toes tingle.

She sucked in a breath. “Aww…thanks. Nice to meet you Conner.  Won’t you please come in for a few minutes?”

She awaited his decline.

“Sure. Just a sec.” He retrieved his bag from the taxi then followed her inside.

Lindy’s intense attraction to Conner threw her off kilter.  She’d never been a love at first sight type of girl. She swore she’d been shot with a lusty arrow from some little winged cherub. She motioned for him to the sofa. “I’m having some wine. Would you like some, or maybe a beer?”
“A beer sounds like heaven.” He smiled and set his gear down and sat on the sofa.

After refilling her glass, Lindy returned with a brew in hand and sat next to the man who had thirty pounds of brawn on her sibling. “Please tell me how my big brother is really doing.  His too pleasant e-mails leave me wondering.”

She hung onto his every word about their daily lives in the military. Conner didn’t reveal any of the dangers of their job, but amused her with funny stories. It seemed Dan and he were the jokesters in their platoon.

He finished the last of his beer and she glanced at the balloons tied to the kitchen chair.  The irony of the day bordered on karma. “Conner, you made this Valentine’s Day very special.” She touched his shoulder, noting hard muscle beneath his uniform.

His cheeks reddened as he gave her a bashful smile and stood. “It was great to finally meet you. You’re as sweet as Dan said.”

She cleared her throat. “I miss him.”

“He’s planning on being back in time for your wedding, right?” He cocked his head.

She glanced out the window. “I called off the wedding. For good. Dan was right about Brad.”

“I’m sorry.” He took her hand and gave it a comforting squeeze.

“It’s for the best.” She was angry at being so gullible, but deep down there was relief. “How long before you have to return to Afghanistan?” she asked with concern.

His eyes brightened. “My tour is done.” Then he scrubbed his beard stubble. He’d probably been traveling close to twenty-four hours.

“Will you be staying in the area?”  Besides being a

She wished she could get to know more about this man her brother was so close to. “Good for you. I’m sure your Valentine is waiting for you and I’m holding you up.”

“He picked up his gear. “I’ll be staying on base until I can rent a place.”  He gazed about her place.  “Do you know of any vacancies in this complex?  It’s close and would save on gas.”

Lindy blew out a breath and went for it.  “Well, since my tour of engagement ended abruptly, I’ve considered getting a roommate. You interested?”

Conner dropped his duffel and his mouth broke into a wide grin. “Even better…How about I treat you to dinner?  It is still Valentine’s Day.”

“You must be Cupid?” She winked.

His brawny arm slipped over her shoulder.  “Bet you never thought you’d meet one in camo.”

No, but if she was lucky, she might get a glimpse of one without them…

THANKS TO ALL THE CUPIDS IN UNIFORM

8 thoughts on “Cupid in Camo – A Valentine Short Story”