This week, I asked the Romance Writers Weekly crew about

bad guys and girls. Villains: Literary, TV/Movie or even real life – Who do you love as a villain and why. Who do you despise and why?

To me a villain and an anti-hero are a hairsbreadth from one another.  On that note, my favorite anti-hero is Jax Teller of SOA (Sons of Anarchy. He doesn’t want to be

bad but lifestyle keeps forcing his hand. As hard as he tries, he can never escape the MC (motorcycle club) culture as well as how he was raised.  On the true villain side, Hannibal Lector from Silence of the lambs, is my top lister.  He’s a genius and so smooth as he compels victims into his web. If he wasn’t a killer, he’d make an awesome business man. His wit and draws people to him like a moth to a flame. (Pun intended if you know the story!) Yeah, he’s a schizoid, but you’d never know until he has you for dinner!

A villain I despise is The Joker in the movie, the Dark Knight. The late Heath Ledger did such a great job playing bat shit crazy I never finished watching the film. Jonathan Randall from Outlander is another type of evil character that shakes my core. He’s a masochist that should have been castrated without anesthesia. 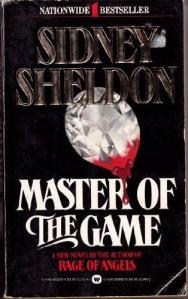 did something so reprehensible it killed my interest in the story. In The Shield, Vic Mackey killed a brother cop in the first episode. I flipped the channel and never looked back. When the bitch queen in Game of Thrones shoved the little boy off the ledge, I shoved her and the show off my DVR recording list. Too evil and vile too early and you risk losing me as a viewer or reader. Obviously, these acts didn’t detour most as these shows went on to be mega hits.

Villains and villainesses need to be multi-layered with a compelling motive in order for me to pull for them. Years ago, I read Master of the Game by Sidney Sheldon (what a writer!) Kate Blackwell screwed everyone over to get to continue her family line the but the way Sheldon wrote her, you might not like her, but you understood her compulsion. Now let’s find out the lovely  Leslie Hachtel’s least favorite baddies.  And if you haven’t already visited historical author, A.S. Fenichel , on the hop, please check out her post.