Jo dug her toes into the sand beneath the lounge chair. Sky and water stretched to infinity. Drinking coffee on a beach wasn’t odd. She did so nearly every morning back home on the Outer Banks of North Carolina. Having coffee seaside in Hawaii with palm trees reaching skyward seemed right out of a dream.

A relaxing cascade from a nearby waterfall, exclusive to the resort, made it a perfect honeymoon destination for two water lovers like she and Ray.  Two years ago, as she was fingerprinted in California, she never imagined being free again, much less married the man she’d been in love with as a teen.

His hearty chuckle brought her back as he chatted with the surfside bartender. A few seconds later, he sat down beside her and handed her a plate. “He gave us some fruit and croissants.”

“Thanks babe.” She nabbed a piece of sliced kiwi. The large blue sapphire sparkled on her finger.  How did she get so lucky?

He raised his wrap-a-round shades  to the top of his head. Ice blue eyes that always read her soul asked, “So surfing or hiking today?”

Her belly warmed inside as she remembered this morning in bed. While she wanted to ask for another round, she tamped down her attempt at a sexual innuendo. “How about that helicopter tour?”

“You think the pilot will let us have some fun in the back seat, if we pay extra?” He winked.

So his mind was on the same track. She grinned. “You could barely get those shoulders of yours though the door of the airplane bathroom.”

He nodded with a smirk and picked up his phone. “Let’s see what times they have open.” The man could have played pro football but decided firefighting was his calling and her dad probably has something to do with his choice of careers.

She was living the trope of falling for her brother’s best friend and it was absolutely fantastic.

Two hours later, a lush, green tropical canopy skimmed below them as they crested another volcanic cliff and then zoomed out over the sea. From the outcropping a towering waterfall projected a rainbow in its mist.

Ray snugged her hand in his.  “Paradise, huh.”

“Yep, almost as good as sleeping next to you.” She bumped his shoulder.

The chopper dipped suddenly as the engine died. The pilot punched the start over and over working the controls as he tried to control their rapid descent.

“Shit.” Jo’s heart rose to her throat.  No! They couldn’t die like this. Not after all they’d been through.

The terror in Ray’s eyes said yes they would.  “I love you baby.”

He met her lips with a lingering kiss.

The chopper slammed into the water then blackness.

“Get up!” a harsh female voice echoed in Jo’s ears. I don’t have all day!”

The guard yelled again.  “Your bail has been posted. Get you blonde ass moving.

At least she wasn’t dead…now to somehow get back home. She ached to see Ray. Would even have anything to do with her now?

Want to find out if Jo makes it home and finds Ray? I wrote this as a prequel to Hot as Blazes. It’s available on Kindle Unlimited and all major e-book sellers and in paperback.  Now check out the lovely Leslie Hachtel for her flash fiction.

Hot as Blazes, my first release with Lyrical is out today! I’m so excited about this steamy contemporary romance about Jo Mercer who returns home to the Outer Banks after her life has taken an unexpected turn.

To celebrate, I’m giving away a couple of (US) e-book copies of Hot as Blazes on the Kensington Sizzle Summer Releases Facebook event.  The party starts at 7:00 pm and goes until 10:00 pm.  Join me and other romance authors, Kimberly Kincaid, Jenna Jaxon, Annabeth Albert, Gail Chianese, and Sara Walter Ellwood. 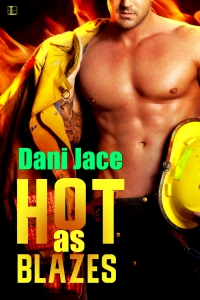 Here’s a snippet from chapter one:

The dated Shaker-shingle beach house brought Jo Mercer to tears. She’d doubted ever seeing it again. After parking, she wiped her eyes and patted the dash of her dad’s classic Bronco her brother, Bobby, had left at the airport for her.

As she stepped out of the truck, a warm Outer Banks sea breeze kissed her cheeks. Dune grasses waved in welcome. Home. The only sweeter thing would have been a husky Dahlin’ from Bobby’s best friend, Ray. Unfortunately, her stealth homecoming prevented opportunity. Ray was the last one she wanted to know her big California surfing dream had ended like a movie of the week crime drama.

By the dunes sat a black H1 Hummer, chrome surf rack glittering in the afternoon sun. It displayed a firefighter license plate. Probably one of Bobby’s friends. She climbed the steps to the house, unlocked the side door, and stepped inside.

The fragrant cedar aroma drew her into a familiar bare bones décor consisting of a big screen TV, over-sized recliner, and sofa with a couple of end tables. She skimmed her fingers along the worn flagstone fireplace mantle before reaching her father’s flag. So hard to believe he was gone.

Outside, the shower door slammed. Jo secured her sunglasses and headed down the deck stairs.

Broad back muscles stretched the Nags Head fire department logo on the man’s shirt as he racked his surfboard. Behind a pair of wraparound shades, he eyed her. “Bobby’s gone for the weekend.”

Her dad had been a captain for Nags Head. “Yeah, I know. How were the waves?”

His smile seemed familiar. He whipped off his shades and closed the distance. “Jo!”

“Ray?” She nearly toppled from her platform flip-flops as huge biceps wrapped her in a bear hug that left her toes dangling. His touch shot through her veins like straight whiskey.

“Bobby didn’t mention you were coming home, Dahlin’.” His pale blue eyes held her captive and his southern twang brought her home faster than a jet from LAX.

The sexy sound of her pet name made her stutter. “Ahh, it was last minute.”

Well over six foot, her high school surfing buddy had grown into a man with a body rivaling most NFL tight ends. He squinted and cocked his head.

With her lifelong fantasy standing so close, coherent sentences failed her. She poked the firefighter seal over his rock hard pectoral. “So what’s this?”

Hope you enjoyed the excerpt.  Hot as Blazes is available at all major e-book retailers. Feel the heat at: Amazon  B&N  All Romance