Today Jenny Hayut’s Holt Maddox from Shifting Gears in the hot seat. Tell us about your woman and how you met. Nicolette owned my heart from the moment I saw her  swaying her hips in that chair listening to the band playing at The Rox.

What’s one thing you’d never tell her? Get off.

*Clears throat* I’m almost afraid to ask what’s one thing she does to totally turn you on? Smile…right before she talks filth to me.

Do you have a fetish? If so, what is it?  *Snorts looking around* Wanna lock that door? Better if I show you.

Whoa! So, should I ask where you were when you lost your virginity? *Grins* you first.

LOL! It involves four wheels. Tell us your occupation? I do interviews with beautiful women…Grinning…I’m a bounty hunter sweets.

Back at you Big Dawg. And you certainly have him beat in the looks department. Nice tats by the way. How do you stay fit?  Ask Niki.

So I’m betting she doesn’t owna a gym membership either. *winks* If you could change one thing in your life, what would it be? Not leaving my mother.

Hmm… You sound remorseful.  Hope that event is brought out in the book. What intrigues you most about Nicolette? How she got me to fall in love with her.

I bet it has something to do with shifting gears. What does she do that drives you crazy? When she tries to read a book while I’m lying next to her…naked..she’s not really reading anyways…How can she with me beside her?

Indeed, how could she? Tell us a secret no one knows? *shifting eyes* yep it involves tools…big ones

I really think Jenny needs to give you your POV in the next book. What’s your method of travel, muscle car, motorcycle?  My Buick babe.

Is it special to you? First thing I ever called my own.

Heard that. Do you have any hobbies? Seeing how fast I can make a woman squirm while they ask me questions…..*laughing* Drag racing…nothing better than losing yourself to the rhythm of speed.. don’t you think? *grabs his keys and stands*

I could see where that’s addicting. Well, Holt, great to meet you and thanks for a refreshing, alpha male interview.

His chiseled arms are crossed over his worn t-shirt. It doesn’t take much imagination for me to feel those arms wrapped around me. My gaze trails to one of his tattoos, peeking out from the sleeve of his shirt. I flash back to lying next to him, my head resting on his chest, tracing its delicate lines with my fingertips, or when I was brave enough, my tongue.-Niki Stringer 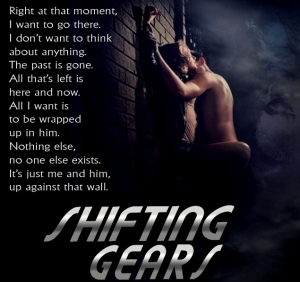 “Fuck,” he breaths out, tightening his hold on me. “Baby, I’m trying to wait. Give you the time you need. But the way you’re looking at me right now…fuck. I know what you were feeling when I left, because I was feeling it too. You were pulling me, every fucking time I closed my eyes. I could smell you. I could feel the softness of your hair on my fingertips, the warmth of your body on mine. Every fucking night, baby. I couldn’t escape it.” -Holt Maddox

I was born and raised in Virginia, in a military town. I know you’re thinking it….yes…lots of hot men…in uniform…sweet…I know.

I am married and have two beautiful children. They along with our extremely spoiled beagle mix Georgia that we rescued from a local shelter, keep me busy. It’s really like four kids and me. Ya’ll know what I’m saying.

When I’m not working, or writing, or eating or sleeping (wait what’s that) I love to be outdoors. I’m on the coast so I love the beach. The Outer Banks is the shiz. Hiking and getting my hands dirty in my flower beds is another favorite.

Any given time you might find me reading a book, watching a race, signing up for a ghost tour, watching a vampire or a motorcycle gang on TV (yeah that one) or making plans to travel further south (it’s where my heart is). Oh and if you have heard…it’s true I don’t share my baklava…that stuff is sacred.

Thanks to Holt and Jenny for stopping in today. If you know a hero who’s itching for some attention, message me on Facebook or through the contact link on the website. I’d love to hear his Cocky Confessions – Dani

Thank you so much for having me as a guest today, Dani. We’ve not met before. He bows. I’m Roark, the Earl of Clarendon. As you might guess, I spend my time managing my estate, Cadbury Park, attending London’s many social functions, and dealing with government issues from my seat in The House of Lords. Sounds rather boring doesn’t it?

Not at all, but maybe a bit stressful. Are you married or engaged?

I’m recently married to my lovely bride, Adaira, whom I met in The Earl’s Enticement after she abducted me and locked me in the dungeon of her family’s keep. He grins.There was nothing the least bit boring about that.

LOL! And she’s certainly not a paling violet. Tell us something no one would believe about you? Large or small.

I have a terrible sweet tooth and keep a sweets stashed all around the manor house. I believe it comes from my father refusing to allow me bon bons as a child. I can’t resist a confection to save my soul.

We certain share that addiction. However, you’re metabolism appears to handle sugar better than mine. What’s the one thing you’d never tell your lover?

Roark looks around, then leans forward and whispers, “Addy snores and talks in her sleep.”

It sounds like you find that endearing. Do you rely on your physical prowess or your intelligence to attract a lover?

He arches a brow, then brushes a piece of lint from his impeccable black tailcoat. Why both, of course. I find both desirable in my lover, and I prefer to have my brain stimulated every bit as much as my . . . well, you know.

Is there a specific body type, hair, or eye color that attracts you? Does your current lover meet the criteria?

I’ve always been attracted to women with full curves, voluptuous some might say. My first wife was a beautiful blonde with the heart of a harlot. When I married her, I thought her the most exquisite creature I’d ever met.

Addy, is petite and very slender, with coffee brown hair and almost black eyes. She’s wormed her way into my very soul. No other woman comes close to her magnificence in my estimation.

What do you believe is your most attractive feature?

Adaira tells me it’s my eyes. She describes them as a hydrangea blue. Sounds rather silly to me. I’ve always thought woman were attracted by my smile. But who am I to argue with my wife?

What intrigues you most about your lover?

Addy is the most giving, generous woman I’ve ever known. She might be petite in form, but she has the heart and determination of a behemoth.

Aww…that’s sweet, but there’s gotta be something she does that drives you crazy.

Addy has a stubborn streak, and when she makes up her mind she wants something, there’s no dissuading the woman. She insisted on riding Fionn, her stallion, until she was well into her pregnancy. Roark shakes his head as he gives a lopsided smile.

She also wears breeches in public, but I’ve almost gotten used to the gasps and snickers. Besides, I quite like her attired in breeches. The view is lovely from behind.

Other than Addy, do you have a hobby?

Aside from collecting unfortunate animals and staff? Yes, I dabble in horse breeding, and when in London, I box. In my youth, I tried my hand at poetry, but my prose is sadly lacking.

Wow, a soft-hearted fighter. Is there a favorite place you’d like to travel?

I’d love to take Adaira on a tour of the continent. She’s never been to Rome or Spain. Both are teeming with romance. I think she’d quite like the history as well as the culture. Plus, both boast some splendid horseflesh, and as you know, Adaira is obsessed with her horses.

And you are a romantic as well. It was wonderful having you, Roark. I wish you and Adaira all the best.

Thank you again for inviting me today. It’s been most pleasurable.

She won’t be tamed.

A fiery, unconventional Scot, Adaira Ferguson wears breeches, swears, and has no more desire to marry than she does to follow society’s dictates of appropriate behavior. She trusts no man with the secret she desperately protects.

Haunted by his past, Roark, the Earl of Clarendon, rigidly adheres to propriety, holding himself and those around him to the highest standards, no matter the cost. Betrayed once, he’s guarded and leery of all women.

Mistaking Roark for a known spy, Adaira imprisons him. Infuriated, he vows vengeance. Realizing her error, she’s appalled and releases him, but he’s not satisfied with his freedom. Roark is determined to transform Adaira from an ill-mannered hoyden to a lady of refinement.

He succeeds only to discover, he preferred the free-spirited Scottish lass who first captured his heart.

Excerpt from The Earl’s Enticement

“You do know—” Roark’s gaze roved the tidy cell, noting the fat, black spider weaving a web in the corner above the cell’s door, before returning to Miss Ferguson, “you could go to prison, for a very long time, for abducting and imprisoning a peer of the realm.”

“Ah, but then you’re not a peer are you?” She smiled again, the row of her neat white teeth shining bright in the shadowy corridor. “In fact, I do believe I’ve done the Crown a tremendous favor. I’ve apprehended a known spy.”

His gaze captured hers. Her eyes appeared black in the meager light, except for those unusual jewel-like gold specks reflecting in her irises. He fisted his hands, the only outward manifestation of his fury.

“That’s twice you’ve accused me of being a traitor. If you were a man, I’d call you out for it.”

She raised a perfectly arched chestnut brow and grinned. “Swords or pistols?”

Roark swept his gaze over her figure, shaking his head in disapproval. “Don’t tell me you’re trained in weaponry?”

“Of course.” She struck a fencing pose. “En garde.”

He closed his eyes for a brief moment. “Was there ever a more unladylike woman of refined breeding?”

Miss Ferguson dared to inch a bit closer, then bold as brass, pointed at him and chuckled. “You did it again. Spoke your thoughts aloud. My, but that must be aggravating.”

She leaned in a fraction, seeming to assess him with her keen eyes. Her subtle fragrance wafted past his nostrils. Something with lilies? He resisted the urge to inhale deeply.

“Can you keep any secrets, or does everything gush from your mouth like milk from a teat?”

Roark’s mouth dropped open. He gawked at her.

“Had she truly said teat?”

Mischief danced in her eyes. “Yes, I did. Teat.”

Award winning, Amazon best-selling, and multi-published historical romance author, Collette Cameron, has a BS in Liberal Studies and a Master’s in Teaching. A Pacific Northwest Native, Collette’s married, has three amazing adult children, and five dachshunds. Collette loves a good joke, inspirational quotes, flowers, the beach, trivia, birds, shabby chic, and Cadbury Chocolate. You’ll always find dogs, birds, quirky—sometimes naughty—humor, and a dash of inspiration in her novels. Her motto for life? You can’t have too much chocolate, too many hugs, or too many flowers. She’s thinking about adding shoes to that list.

You can connect with Collette on Goodreads, LinkedIn, and Google+ too. Go to her website for the links, her email address, and mailing address.